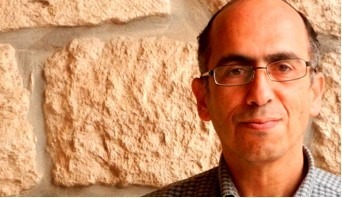 Prof Mazin Qumsiyeh of the Palestine Museum of Natural History and Palestine Institute of Biodiversity and Sustainability, Bethlehem University, will speak of the challenges of accelerating human destruction of our natural world. This requires global and local responses but even in the best of circumstances, research, education, and conservation efforts struggle to meet those challenges.

In Palestine under colonization and apartheid, these challenges are compounded. Yet issues such as biodiversity, conservation, and sustainable development cannot wait for the peaceable and just end to the political situation. Mazin will show how working on these issues is itself a transformative part of the struggle for freedom.

In early August, Professor Mazin Qumsiyeh will visit Scotland spending time in Edinburgh including a visit to Hadeel. Mazin teaches and does research at Bethlehem and Birzeit Universities. He previously served on the faculties of the University of Tennessee, Duke, and Yale Universities.

Mazin and his wife, Jessie, returned to Palestine in 2008 founding a range of
institutions and projects such as a clinical genetics laboratory that
serves cancer and other patients. They founded and run the Palestine
Institute for Biodiversity and Sustainability (PIBS) at Bethlehem
University (BU) which attract visitors to Palestine from around the world.

Prof. Qumsiyeh has published over 140 scientific papers on topics ranging from cultural heritage to biodiversity to cancer. His many published books include “Bats of Egypt”, “Mammals of the Holy Land”, “Sharing the Land of Canaan: Human rights and the Israeli/Palestinian Struggle” and “Popular Resistance in Palestine: A History of Hope and Empowerment”. He also published hundreds of articles and letters to the editor and has an activism book published electronically.

Mazin is a seasoned speaker and campaigner having given hundreds of talks in 45 countries around the world.  He especially believes in youth empowerment towards social and environmental causes. The programmes Mazin and Jessie created have impacted on the lives of thousands of people. He also serves on the board of a number of Palestinian youth and service organizations.

As an activist and campaigner Mazin has been harassed and arrested for
non-violent actions but has also received prestigious awards
for these same actions. Mazin, Jessie and dozens of other volunteers
and staff at PIBS continue to have “Joyful participation in the
sorrows of this world” and make a real difference for sustainability
of nature and human communities.