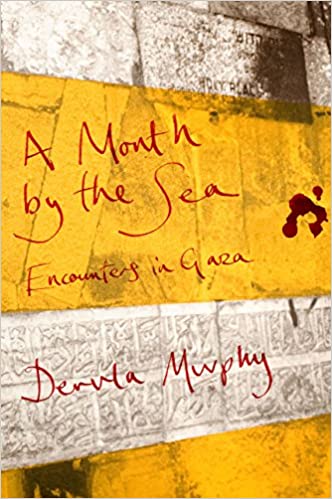 ‘A Month by the Sea: Encounters in Gaza’ by Dervla Murphy, hardback (2nd hand)

Over the summer of 2011, Dervla Murphy spent a month in the Gaza Strip. She met liberals and Islamists, Hamas and Fatah supporters, rich and poor. Used to western reporters dashing in and out of the Strip in times of crisis, the people she met were touched by her genuine, unflinching interest and spoke openly to her about life in their open-air prison. What she finds are a people who, far from the story we are so often fed, overwhelmingly long for peace and an end to the violence that has so grossly distorted their lives. The impression we take away from the book is of a people whose real, complex, nuanced voice has rarely been heard before. A MONTH BY THE SEA gives unique insight into the way in which isolation has shaped this society: how it radicalizes young men and plays into the hands of dominating patriarchs, yet also how it hardens determination not to give in and turns family into a towering source of support. Underlying the book is Dervla’s determination to try to understand how Arab Palestinians and Israeli Jews might forge a solution and ultimately live in peace. Dervla looks long and hard at the hypocrisies of Western and Israeli attitudes to peace’, and at Palestinian attitudes to terrorism. While this shattered people long for a respite from the bombings that have ripped a hole, both literally and psychologically, in their world, it seems that politicians have an agenda that pays little attention to their plight.