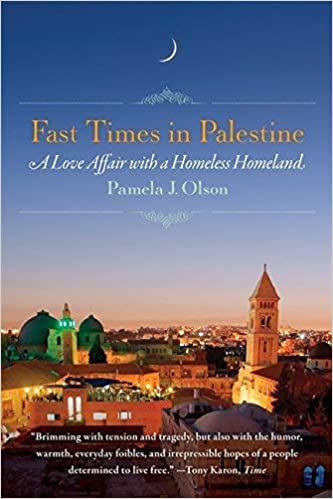 ‘Fast Times in Palestine: A Love Affair with a Homeless Homeland’ by Pamela J. Olson, paperback

Pamela Olson, a small town girl from eastern Oklahoma, had what she always wanted: a physics degree from Stanford University. But instead of feeling excited for what came next, she felt consumed by dread and confusion. This irresistible memoir chronicles her journey from aimless ex-bartender to Ramallah-based journalist and foreign press coordinator for a Palestinian presidential candidate. With dizzying speed she finds herself attending Yasser Arafat’s funeral, sharing a holiday dinner with a suicide bomber’s family, tour-guiding Israeli friends around the West Bank, dating a Palestinian from a conservative Muslim village, being held at gunpoint and injured by a stun grenade, and witnessing the 2005 Disengagement from inside the Gaza Strip. The gripping narrative focuses not only on violence, terror, and social and political upheavals but also on the daily rounds of house parties, concerts, barbecues, weddings, jokes, harvests, and romantic drama that happen in between. From idyllic olive groves to Palestinian beer gardens, from Passover in Tel Aviv to Ramadan in a Hamas village, from rooftop parties in Ramallah to militant rallies in Nablus, the book is packed with suspense, humor, and unforgettable characters. Its seamless blend of travelogue, memoir, and narrative journalism ramps the average American up to a sophisticated, multi-faceted understanding of the Israel/Palestine conflict. Funny, gorgeous, shocking, and galvanizing, Fast Times in Palestine challenges the way we think not only about the Middle East but about human nature and our place in the world.